The Meaning of Co-Creation

I’ve received twenty-one emails since late August when the back-to-school plan was announced. Many are multiple pages long, and that doesn’t include the messages sent directly to our kid’s school email addresses.

Today you can fully expect parents to make #fireSomeone trending on twitter because little Porter was confused about which classroom to go to, prompting parents to think the school board has no clue what they’re doing.

Let’s put this into perspective:

Our back to school plan includes:

What needed to change:

There is much more detail in the entire plan, which I’m not going to get into because that’s not the point of this post.

The point of this post is around the co-creation of change. I believe in a diverse and inclusive approach to change that gives people affected by the change the option to contribute to its creation.

But is that possible with this change? How likely is it that 130,000 teachers will coalesce around the “right” plan? How likely is it that the people responsible for the back to school plan can satisfy two-million kids and the close to four-million parents/guardians/caretakers of these children? How possible is it for the school board to ensure the policies, especially the self-health checks?

They’re in a lose-lose situation. No matter how good the plan is, it won’t satisfy everyone, and that’s what we’ll focus on verses focusing on being responsible parents.

The arguments against co-creation I typically hear are

Usually, these arguments come from people who are used to the top-down, linear and plan-based approaches for change. That is, the stakeholders decided on a change and dropped it onto the change team through the hole in the floor.

First, let’s look at the school re-opening. What did they do that captures the spirit of co-creation:

Co-creation isn’t about satisfying everyone and doing whatever they want. It’s about clarifying who decides what but leaving options open long enough given the context.

The key with co-creation is to find the line: 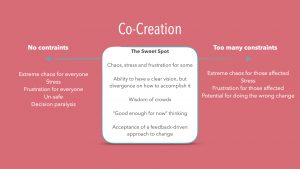 The school board can’t NOT send out information; that’s not the message. The message is, it’s impossible to think of everything upfront and to be adaptable is the key. There will be an increase in cases. There will be kids who refuse to wear masks just because they’re assholes. There will be whacko parents flooding social media with #fireEveryone tweets.

Co-creation isn’t only about how *you* approach change as a change agent; it’s about the attitude people have. If we can help people shift away from *me* thinking to *we* thinking, they at least have the choice to contribute, give feedback, complain when they disagree, but ultimately emphasize doing the right change in the right way.

Please ignore the ugliness of that form, we blame the developer who said “the requirements didn’t say make it look nice”